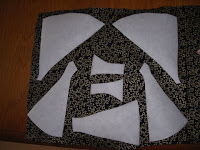 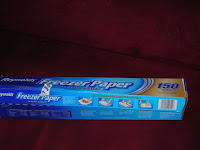 Here is one very valuable tip I learnt at MSATminidolls : how to cut the patterns.
It does not only help to cut pattern from kitchen paper or such, to test the pattern against the doll ( not all dolls are the same size ! some are thicker , some are petite ), but the trick I am really fond of is drawing the pattern -by simply tracing with a pencil, onto Freezer-paper. I roped in the help of someone who visited the USA, and recently I got a glorious other roll from a visiting friend from the USA ( thank you, Elise !).
Freezer-paper is silicone-coated ( on ONE side ) paper , found in supermarkets in the USA. This side of the Atlantic, you might find it in quiltshops.

You simply cut out the patterns, lay them out onto the fabric , preferably on the right side, and iron them into place : coated side down on the fabric.. Then you cut them out and seal the edges ( I use Aleenes tacky glue ), on the wrong side, while the parts are still on the paper.
Afterwards you can pull the pattern parts loose. The freezer paper pattern is re-usable, so hang on to them by all means if you want to.
Posted by elly in amsterdam at 9:48 PM No comments: 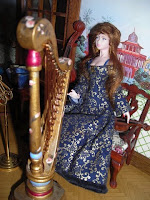 Meet Nathalie :
Today I finished a doll by Dana Burton ( an on-line class). Although I did not make it to the real class room, the files sent out by Dana were very clear.
I even painted her nails laquer-red.
The doll has a very fine face ( always very important to me ) and she has got arms with very fine fingers. I have been walking over eggshells , hoping that all those fingerlets would survive my handling, and that my cats would pleeeese not start playing wih the doll......Well , up to now I have been lucky !

As you can see, she is going to learn and play the harp. 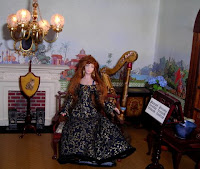 Posted by elly in amsterdam at 9:14 PM No comments:

Joans cat lives in Canada .
Not stitched , as yet , but you can see he is a beautiful oldie...

here is the chart , in case anyone wants to stitch him- or a cat like him !

My friend Petra converted the file for me , so that I could upload it here , thanks ,Petra!
Posted by elly in amsterdam at 9:21 PM No comments:

OK , some new things are playing around in my very busy mini-brain...That brain usually works in overdrive, anyway.


I ordered some doll kits, from several favourite artists, one from Nancy Cronin, which she taught at Sturdbridge ! Here she is : she looks wonderful and I imagine she will be a very good friend to my cat- lady.
The cat- lady is collecting as many friends as she does cats , by now. How could it be otherwise ?When I have the opportunity , I will introduce her and her friends and foe/ neigbour....

I designed a cat for Joan fom Canada , who came here for dinner last week, with her husband. So will stitch that one , soon. Will show it. First ,though , I need to stitch another kitty, a redhead, who is very resistent to designing...
Posted by elly in amsterdam at 9:05 PM No comments:

I finished two cushions today, both of which I designed.
They are thought as presents for their owners by friends of Corinne Anderson ( a very famous lady, president of the IGMA ), for whom I also stitched two cats.For the friends, I mean.Everyone still with me ? OK....

Meet here : Zachary Taylor and Woody , beautiful Cocker spaniels.
I must admit that Woody first had me nearly beaten, as brown tends to draw to lilac and green in the design program that I use. One pic of him was very black, but I got word that he was really chocolate brown. A photo-editing program ( simply Picasa , freely downloadable ) helped me to get the colors right and I proceeded from there- and hey presto ! There he was....
Posted by elly in amsterdam at 2:35 PM No comments:

Today my pupil and I went on , started to dress her second doll.

The first one is this one , dressed in blue. Dafna had decided she wanted a Regency style doll , so here she is.
Barbara Davies from the UK made the doll for her.


Since then , she is starting to get addicted ( well, we had decided to do two dolls , anyway , but I think I am detecting some interest in future doll dressing , we talked victorian , and I seem to remember a conversation about a ballgown ??!!...)
So today t 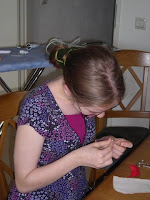 he new doll ( also made by Barbara Davies, thank you Babs !)got her sho 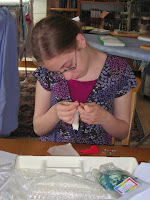 es, her petticoat and pantalettes ( beautiful word that, don't you think ?)
Halfway through the afternoon I sent some pics to her mom, who was hard at work, to let her see that her daughter was hard at work ,as well, and I told her that I had crammed Dafna with cake .
We had a great time ! 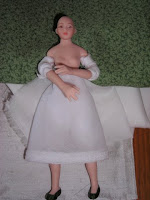 We hope to get on with it in one or two weeks time, it will also be a Regency doll , but with a more elaborate skirt and bodice. And a bonnet !
The pattern was published in Dolls House Projects , made by Sue Jarvie.
Posted by elly in amsterdam at 10:11 PM No comments: 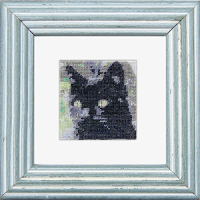 Tommie was a great black cat , who , alas , went over the Rainbow Bridge a short time ago. Of course , his mom and dad were very sad about this.
I offered to make a stitched portrait of him.
His dad was ( fortunately ) delighted and made this wonderful frame .
Isn't he lovely ? And the frame is really great !!!

His mom donated money to the Vet Van , my usual fee :0)
Posted by elly in amsterdam at 8:55 PM No comments: 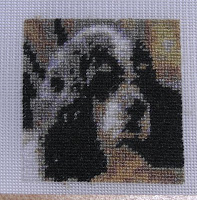 This is Zachary Tailor , a cocker spaniel , living in the USA. His portrait and one of his brother ( a chocolate brown ditto ) are meant as a birthday surprise ; they were oredred from me some time ago.

Since I am stitching the other portrait on the selfsame silk gauze, I will wait finishing both of these till I have stitched the second one.
I like this one , though !
Posted by elly in amsterdam at 8:47 PM No comments: 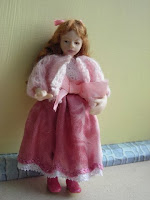 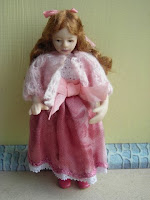 I finished a small project : a sweet little doll, called Lolita , from an on-line tutorial , made by Dana ( who has been generously giving her time and talents to lots of other mini-doll lovers via her site : http://www.minidolllist.com/ and yahoogroup MSATminidolls@yahoogroups.com since umpteen years).

At first I had some trouble, as the arms did not fit very well , but Dana sweetly sent me a new set of arms, which arrived yesterday. So this morning saw me taking the "old arms "off and attaching the new ones, which fitted great. After which I really needed to get her a wig. It took several attempts, but here she is !
Posted by elly in amsterdam at 8:29 PM 1 comment:

I went to the fair in Soest and brought home : 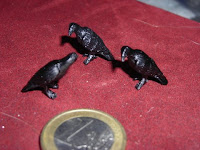 some more birds ! Crows , to be precise.

Why crows ? Well , I need them on my "Highwayman "( that grisly pub, where the usual customers are rather rowdy , if you must know , and sometimes travellers with some more money are stupid enough to enter. That is the last time they were heard of.
I will later show how that is contrived, but will get on with my cat- lady first).

I have some crows standing around there , together with a cat. Now is the cat stalking the crows or the other way round ??? However, all crows had broken legs by now

, having fallen off ( they are hard to glue on this house ), so I really need to relegate them to the kitchen- pots.Boiled crow ? Crow-stew? Hmmmm.....

Here are the "old "crows when they were younger.
Posted by yael in amsterdam at 10:51 PM No comments: