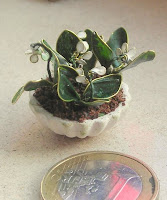 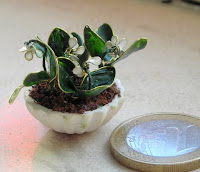 After which I had the bit between my teeth and sped into making lily-of-the-valley (well, let us say: it is an impression of....)Of course, I should have formed the little flowers a bit into bell shape, but I assure you they are hard enough to do without such fanciful additional thingies!
I hope if teacher sees them , she is at least partly pleased ( eh Shelly? )
Posted by elly in amsterdam at 6:12 PM No comments: 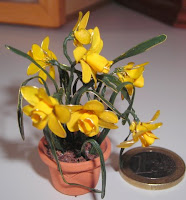 I made some giant narcissi today!
As it is a holiday in this country ( Queens'birthday) I have a day off, so I decided to make something mini. I decided to go for faux enamel (wire) flowers and started off with narcissi.
The original instructions told me to use a toothpick for a former of the petals, but although we do have dwarf-narcissi here, our narcissi generally tend to be a lot bigger than that.
Still,I used a former that appeared too big , really, I think the flowers must be in a 1 / 10th scale now. The form was OK, though, so I have started afresh ( after having planted these)
Posted by elly in amsterdam at 5:22 PM 2 comments: 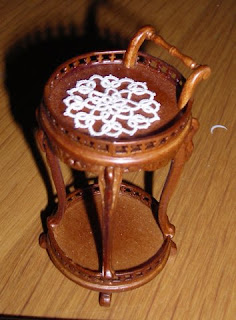 And brought me this beautiful small tatted cloth , made by my clever friend Winnie . It was so small it fitted easily on one of the Bespac teateables in my posh tearoom.
Isn't it great?
Posted by elly in amsterdam at 6:25 PM No comments: 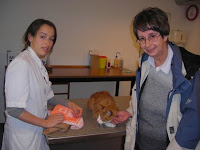 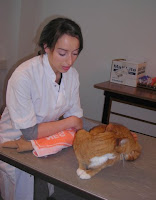 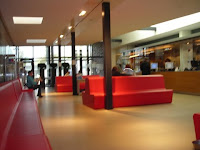 Today I went with Floris to the doctor for his first follow-up after the radiation. Professor was really happy about him, given the very bad prognosis his tumor has. No sign of it so far. But we will have to follow up carefully, a long way to go as yet.Many visits to the University to follow!
Some pics of the waiting- room ( sorry , it is a bad one, I will practice during my next visits), Ilonka Hartzheim,who is describing the Holmium therapy and thus following up all animals which have been treated this way up to now, and Jolle Kirpensteijn, the professor. They made it possible, so i thought it was worth a pic.Several pics.
Posted by elly in amsterdam at 7:01 PM 3 comments: 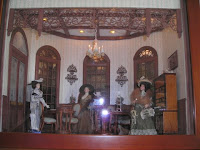 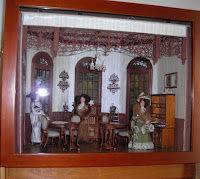 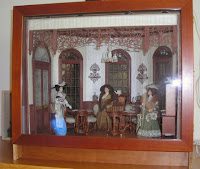 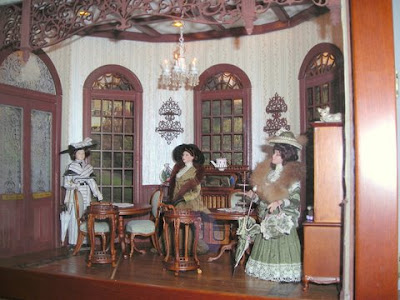 Here it is, finally. The tearoom I made from a kit by Cynthia Howe . The kit was very well done , quiet complete, well thought out and with great, illustrated and well-written instructions - and if there is any unsuspected problem, Cynthia just answers you by email right away.
All fretwork was laser-cut. The furniture ( Bespaq) was also included in the kit. The ceiling was wired, so that the only thing one had to do was be carfeul with the wiring. Well, it was done quite well, too, as the wiring survived the travel over the Atlantic, my handling and the handling by the guy who made a frame for the whole box.
There is a background , lit by fluorette lights over the windows on the outside of the inner box.
The dolls I put in are , from left to right:
a doll dressed by me from a kit by Gisele Sullivan
a doll made and dressed by Debbie Dixon-Paver
and a doll made by Diane Pietrocola.
(Sorry about the flashlights!!! )
Now we need some teapots and cups and cakeplates, and , of course, cakes and sandwiches!
Posted by elly in amsterdam at 7:33 PM 5 comments:

Liked to make this , too while I was at it....
I do not have the foggiest what they are called though , but they do look good , don't they?
Posted by elly in amsterdam at 8:37 PM No comments: 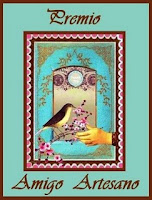 From my friend Karin F I received this award , which I am passing on to my dear friend Shelly Hawley-Yan, who is such a great animal mom. She is also a great mini-artist, designing and stitching the most incredible things- imagine : 72 hpi is her favourite !!!

Thank you Karin!
Posted by elly in amsterdam at 6:23 PM No comments: 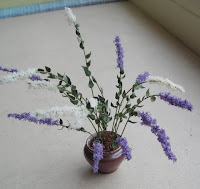 After doing some RL needlework (hemming if you MUST know) I decided to spend the afternoon making some flowers , as described in the selfsame magazine I was bragging about in my latest post. They were done using Flowersoft for the flowers and stained paper. Of course , my leaf punch would decide to die on me, so I used ( halved)heart shapes, which were a bit small. Still , they do look nice enough. It was quite a nice project just for some hours.
Posted by elly in amsterdam at 6:16 PM No comments: 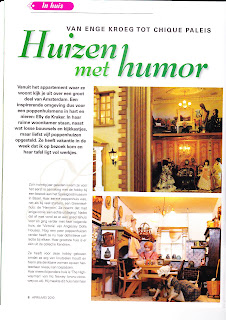 Yesterday I received the latest issue of one of the Dutch magazines, Poppenhuizen en Miniaturen , in which Dienke Cazemier has written a delightful article about me and my dolls houses. The pictures were absolutely wonderful !

If you look at the pics you will see two of my full size furry critters...
Posted by elly in amsterdam at 5:13 PM 8 comments:

Something more for Bluebell cottage 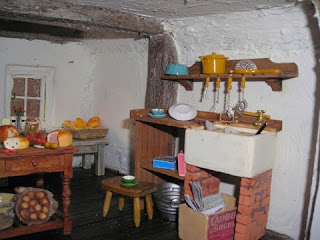 Last Sunday I went to the Arnhem fair , this time in a new venue.
Although I am not overenthousiastic about the venue ( far too cramped, and the centre of Arnhem is not easy to find for non-natives), I did find some nice and neat things.
Some of them came from Anita Degen, who makes wonderful old-fashioned kitchenware, perfect for my little cottage ! Today I put them into place. An oil- cooker will be added whe she has made one( she only makes them to order) and will be put onto the table at the window.
Posted by elly in amsterdam at 7:07 PM No comments:

Been off line for a month 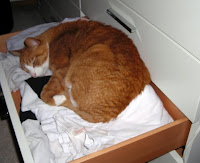 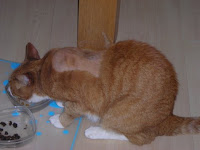 My dear cat Floris appeared to have developed a vaccine-related sarcoma. I had never even heard of the existence of such things. After I got the diagnosis I searched the web on his prognosis and it was bad news ; they are highly malignant.
Now , since I am a cliinical pathologist, I know the drill of treating human sarcomas by heart.Clear excision , as far as possible, and radiation therapy afterwards. So I asked the vet to refer me to the Veterinary Faculty in Utrecht ( the only one here in the country).

There , they quickly made an appointment for a CTscan - CTcat - and he appeared to be clean of metastases; only a small possible remnant of the original tumor.
They advised to local brachytherapy - which is , basically , very topical radiotherapy. I delivered him there last week and yesterday I fetched him home.
I was worried sick! The guy was homesick and refused to eat for days. Fortunately they kept a good eye on him and finally coaxed him into eating and drinking.He seems to like sardines ... As soon as he was home, he was a VERY HAPPY kitty again. He is talkative , though , and a bit restless, but I trust that will be over soon( although I like the talking part).
The only immediate problem is that he seems to expect sardines again :-)
As you can see, he has still a mown part on his neck , where they had to mark the spot for injecting him ( the scar). It looks idiotic , but it does not worry either of us.

HUGE THANKS to the treating doctors at the University , for giving him a fighting chance against this tumor.
Posted by elly in amsterdam at 10:10 AM 3 comments: